There are no "certified" results of marine carbonate system calculations against which software like PyCO2SYS can be unambiguously validated. But we can evaluate its performance by testing its internal consistency and by comparing its outputs with those from other programs.

All the comparisons, numbers and figures shown on this page were carried out with PyCO2SYS v1.4.3, and they apply equally to v1.5.

From v1.6.0, the comparisons with CO2SYS-MATLAB only apply to calculations with input pH on the Total scale. This is because a pH-scale conversion bug inherited from CO2SYS-MATLAB has now been fixed in PyCO2SYS.

PyCO2SYS can solve the marine carbonate system from any valid pair of total alkalinity, dissolved inorganic carbon, pH, partial pressure or fugacity or molinity of aqueous CO2, bicarbonate ion molinity, and carbonate ion molinity. In a "round robin" test, we first determine all of these core variables from one given input pair, and then solve the system again from the results using every possible combination of pairs as the input. We expect to find exactly the same results from every input pair combination.

We can conveniently run a round-robin test with PyCO2SYS for any given set of input conditions using PyCO2SYS.test.roundrobin (script available here):

Running the round-robin test with the inputs in the example code above gave the following maximum absolute differences across all input pair combinations:

The maximum absolute differences across all the different input pair combinations are negligible in this example, all at least ten orders of magnitude smaller than the accuracy with which any of these variables can be measured. The differences are not exactly zero because the iterative pH solvers stop once a certain tolerance threshold is reached. By default, this threshold is set1 at 10−8 (in pH units) in PyCO2SYS.

PyCO2SYS offers two independent ways to evaluate the various buffer factors of the marine carbonate system: with explicit equations and by automatic differentation.

Independent approaches give the same results

Differences between buffer factors calculated with explicit equations and by automatic differentiation are negligible.

The "explicit" approach is taken by functions in PyCO2SYS.buffers.explicit. These use the equations for each buffer factor that have been reported in the literature, corrected for typographical errors where known. These functions typically only include the effects of carbonate, borate and water alkalinity on each buffer, because the other components of alkalinity complicate the equations but usually only make a small difference to the result.

The "automatic" approach is PyCO2SYS's default behaviour and is taken by the functions in PyCO2SYS.buffers. These functions calculate each buffer factor based on its definition as a derivative in the literature. The relevant derivative of the appropriate function from PyCO2SYS.solve.get is evaluated automatically by Autograd (M16). This has several advantages:

Comparing the results of these two independent methods with each other therefore supports that both are being executed correctly. For example, under typical open ocean conditions2 and with zero nutrients:

We consider these differences all small enough to be negligible.

Although explicit check values are not available, we can attempt to recreate figures from the literature to check the consistency of PyCO2SYS's calculations. For example, you can use buffers_ESM10.py to make a passable replicate of Fig. 2 of ESM10: 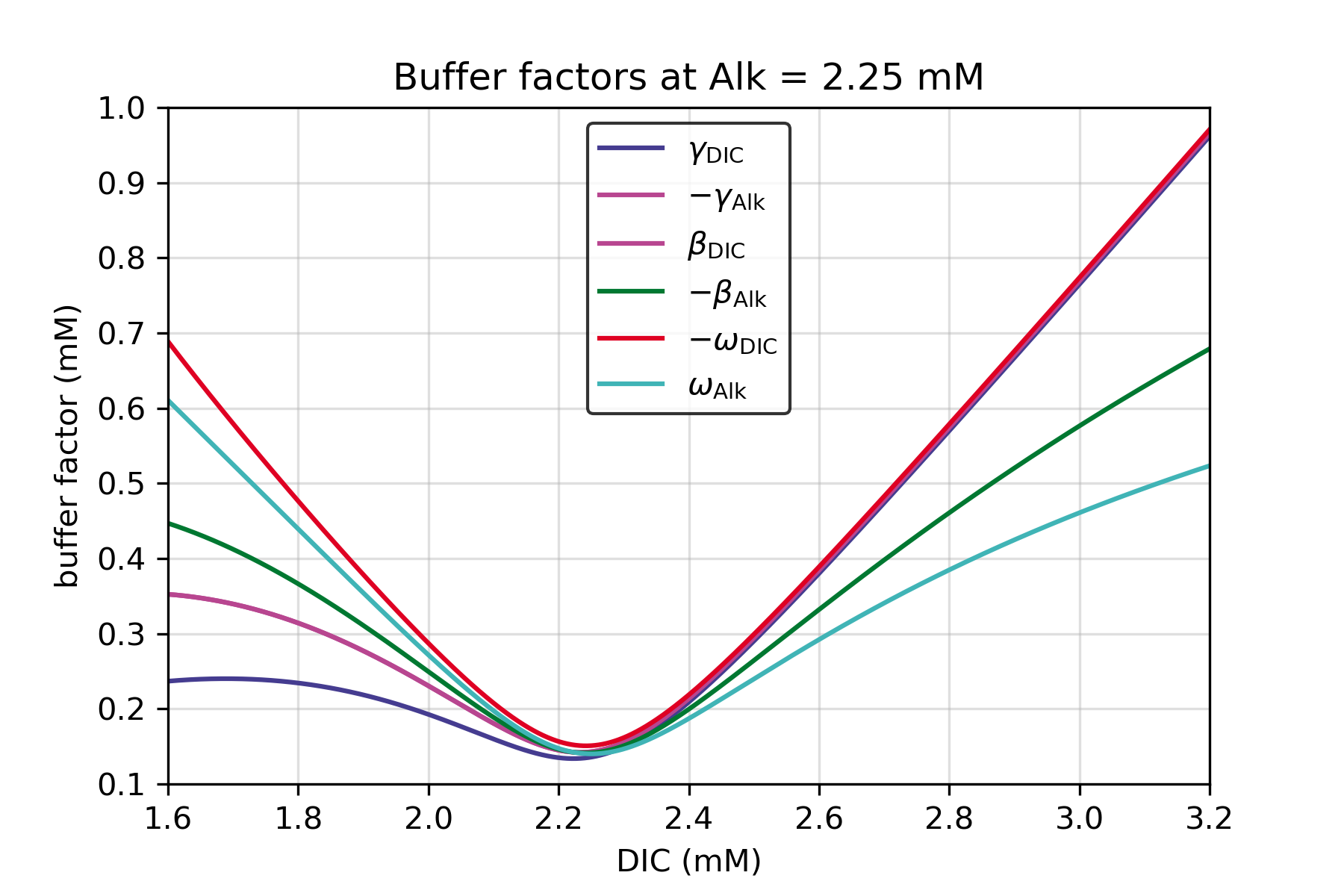 The uncertainty propagation calculations have been tested by comparing the directly calculated results with those of Monte-Carlo simulations (also conducted using PyCO2SYS). The tests have not identified any significant differences between these independent approaches.

You can see the tests that have been conducted, and run them for yourself, with the test scripts on GitHub.

PyCO2SYS was originally based on CO2SYS for MATLAB, version 2.0.5. We should therefore expect that the results of these two programs will agree with each other perfectly, or that differences should be negligible for calculations where PyCO2SYS has since adjusted its calculation approach.

The MATLAB program has itself3 been rigorously compared with a suite of similar software packages that have been implemented in several different coding languages by OEG15. Indeed, it was used as the reference against which all other packages were compared, while noting that this does not guarantee it is error-free. Thanks to the work of OEG15, comparisons with CO2SYS for MATLAB allow us to assess the accuracy of PyCO2SYS in the context of all the software packages that they tested.

PyCO2SYS now calculates a wider array of properties than this version of CO2SYS for MATLAB, and it has more inputs and options, so not everything can be tested this way. However, some of the extra options can be tested against the new CO2SYS-MATLAB v3, available from GitHub.

What can and can't be compared?

We cannot compare calculations with carbonate ion, bicarbonate ion or aqueous CO2 as one of the input marine carbonate system parameters, because these options are not available in CO2SYS v2.0.5 for MATLAB.

The PyCO2SYS outputs either not calculated or not returned by CO2SYS v2.0.5 for MATLAB are:

Against CO2SYS v3 for MATLAB:

However, it still cannot be used to validate the buffer factors (again, except for the Revelle factor), nor directly the total calcium molinity.

You can run the comparisons that the following discussion is based on yourself with:

The v3 results were generated using v3.0 of SPH20. You will need to download your own copy.

If you don't have a MATLAB license, you can run those scripts with the free and open source GNU Octave. Alternatively, the CSV files generated by the MATLAB scripts are available from GitHub.

In these tests, the marine carbonate system is solved from every possible combination of input parameter pair and CO2SYS settings, with non-zero nutrients and pressure. The results calculated by CO2SYS are then subtracted from those of PyCO2SYS for comparison.

Nutrients not set to zero in MATLAB outputs

We've also compared the original CO2SYS clone in PyCO2SYS.original.CO2SYS against CO2SYS for MATLAB. It is important to remember that this module stands in isolation. It has its own self-contained set of functions for evaluating equilibrium constants and solving the marine carbonate system that do not interact with the rest of PyCO2SYS. Agreement between this module and CO2SYS for MATLAB tells us nothing about the performance of PyCO2SYS.CO2SYS or any of its underlying functions (and the opposite).

Under the fairly typical open-ocean conditions used for these tests (for specifics, see the compare_MATLABv2_0_5 scripts), the maximum absolute differences between the Revelle factor under input and output conditions respectively were 0.09 and 0.11, which are almost 1% of the average calculated Revelle factor of ~12. While probably negligible in most real-world applications, these are too big to be acceptable from a software perspective.

There are three separate reasons for the difference, the first two of which could be considered as errors in CO2SYS for MATLAB:

With opt_buffers_mode=2, PyCO2SYS does use the finite-difference approach but it reduces the DIC perturbation size from 1 to 0.01 μmol/kg-sw to increase its accuracy. If we revert both this change and the corrections above, then PyCO2SYS returns Revelle factors that agree with CO2SYS for MATLAB to within 10−6%.