The element carbon has two stable (i.e. not radioactive) isotopes: carbon-12 and carbon-13. Like all natural carbon reservoirs, the carbon in seawater dissolved inorganic carbon (DIC) is mostly composed of the lighter carbon-12. However, several oceanographic processes including biological primary production, remineralisation and air-sea gas exchange measurably modify the ratio between carbon-12 and carbon-13. On top of this natural variability, anthropogenic CO2 released by burning fossil fuels is enriched in carbon-12, leading to a long-term trend of increasing carbon-12 in the ocean called the Suess effect. Observations of the stable isotopic ratio of DIC (denoted δ13CDIC) can therefore help us to pick apart the different process driving the distribution of marine DIC through space and time.

Seawater samples for δ13CDIC were collected during three UK research cruises in the subpolar North Atlantic Ocean. The initial two cruises were in the summer of 2012. The first of these voyaged into the Nordic Seas and as far north as Svalbard for the UK Ocean Acidification research programme, while the second was a repeat occupation of the long-running Extended Ellett Line, a transect between Scotland and Iceland. The third cruise, in summer 2014, again occupied the Extended Ellett Line and also stretched west across the Atlantic to Greenland and Nova Scotia.

I analysed the δ13CDIC in the samples from the first two cruises, and supervised University of Southampton MSc student Florence Greatrix for the third cruise, in Prof Adrian Boyce's lab at the Scottish Universities Environmental Research Centre (SUERC) in East Kilbride. 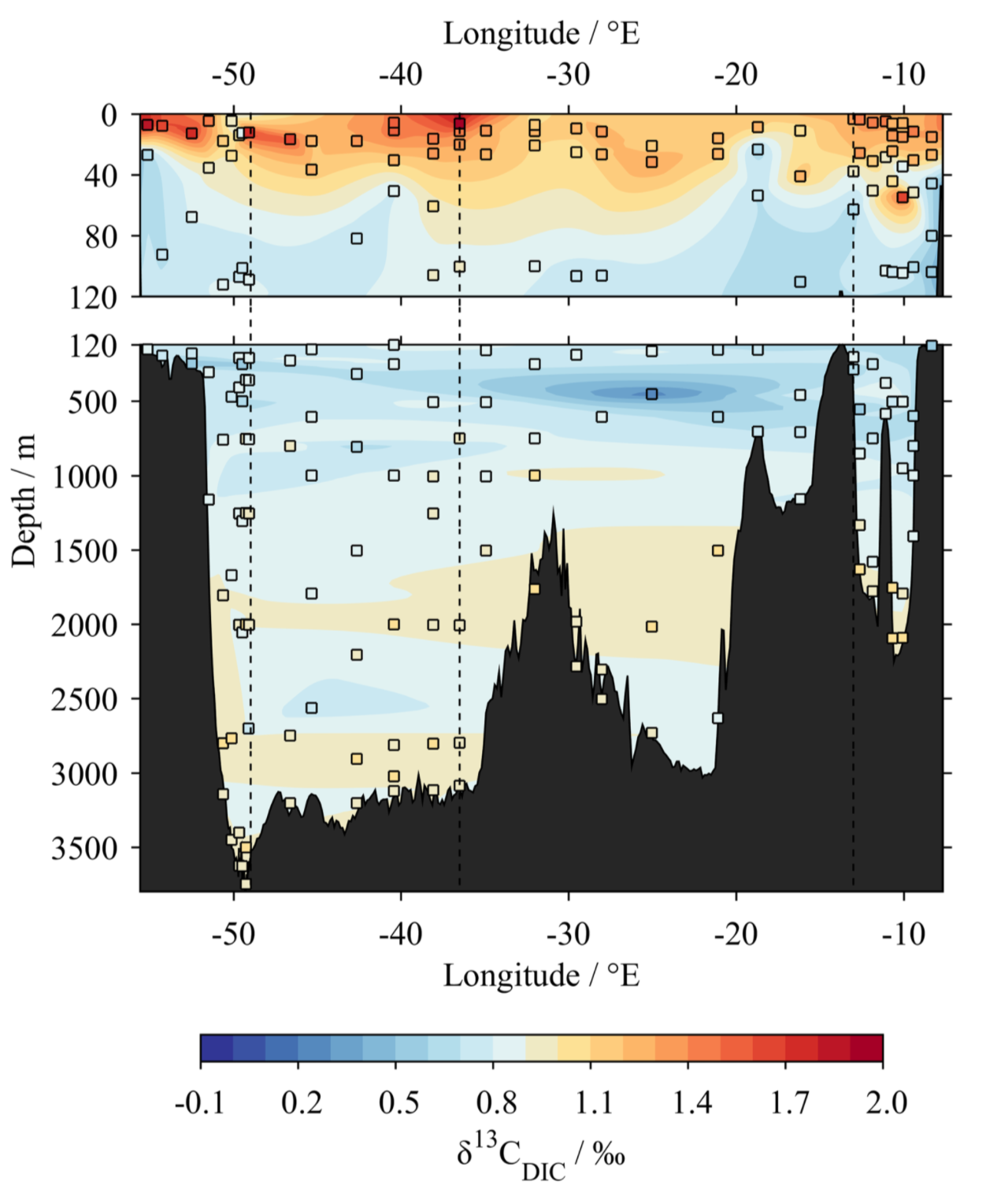 The measurement results have been all published with open access in Earth System Science Data:

The datasets themselves are also freely available from the British Oceanographic Data Centre:

In the second paper above (Humphreys et al., 2016), we also reported measurements of δ13CDIC in seawater certified reference material batches #141 and #144, obtained from Prof Andrew G. Dickson at Scripps Institution of Oceanography (UC San Diego, USA). The lack of a calibration standard in the same dissolved form as the samples was problematic for our analysis, so we hope that these reference material measurements may assist in calibrating the results of future studies.

Left: summary of reference material δ13CDIC measurements from Humphreys et al. (2016). Values are relative to V-PDB. The 1σ uncertainty is on the order of 0.05 ‰. 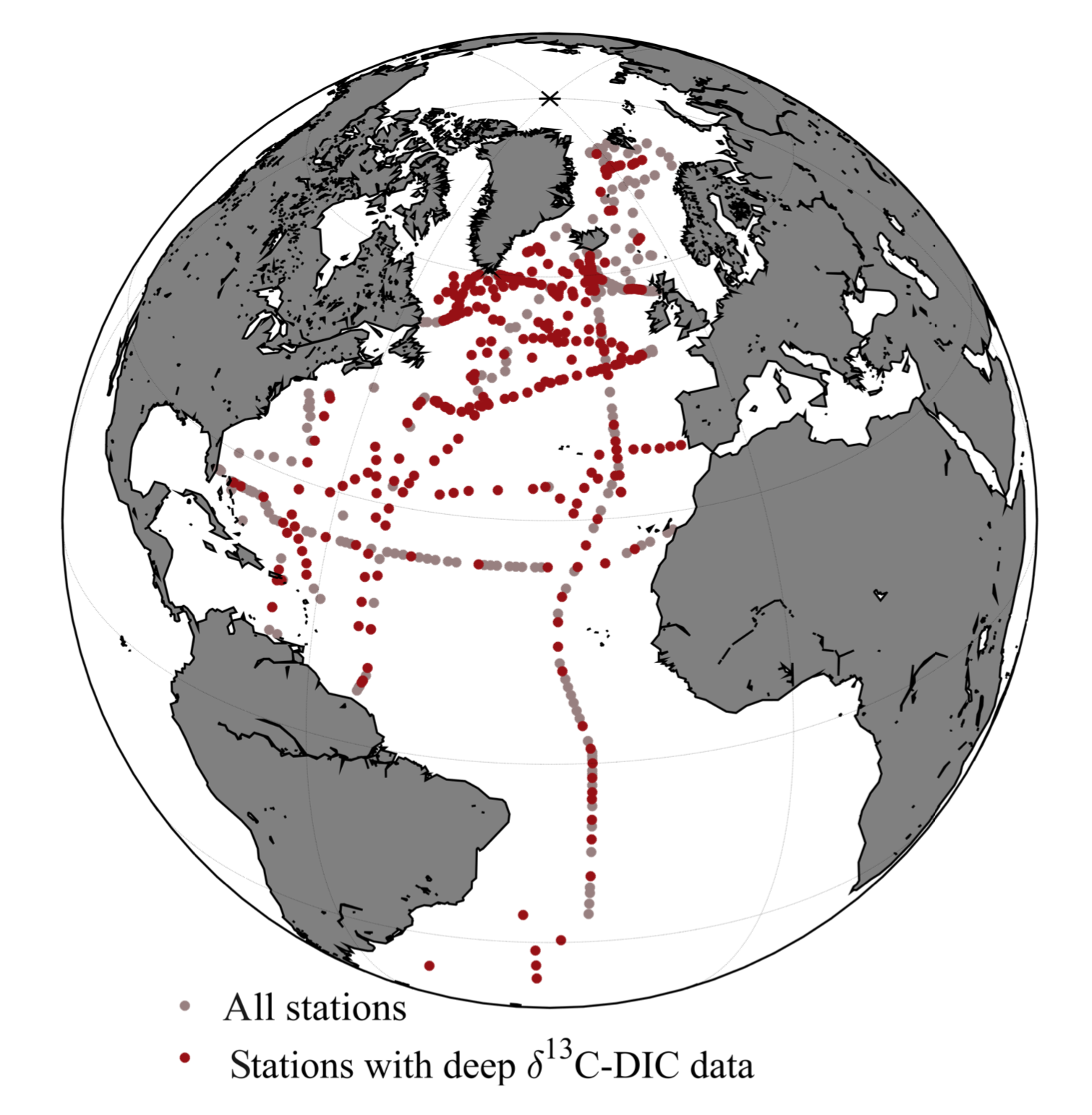 The datasets from the research cruises above are also included in a δ13CDIC data synthesis for the North Atlantic Ocean:

This study tested the consistency between the datasets described here and similar measurements from other laboratories by comparing results in the deep interior ocean at nearby stations. This is known as a cross-over analysis. It showed that the measurements we conducted at SUERC agreed well with historical observations.

Above left: map of δ13CDIC measurements in the North Atlantic synthesis of Becker et al. (2016).